Well it was a busy start to week 2 with physio at 8 am and then clinic after. We are supposed to go to clinic at 8 but because the other CFer was going to go I just went to physio first. Juan wasn’t there today so I had his trusty side kick and Physio in training “Pancho”. Juan had already told Pancho that I would be doing the “Cindy” WOD today so I was in and out in 45 minutes! Last week I did 6 rds.+5 and today I managed 7 rds. Moral of the story- training everyday is possible for. Me and it will pay off as long as I compensate with added nutrition. Had a good chat with the nurse coordinator and another meeting with “Picasso”. He is beyond doctor arrogant and also intimidated by me. I know I can be much and truthfully I have come in like a wrecking ball but no one would ever say I dont shake things up, in a good way! Picasso then tried to convince me and Dad that Edmonton gets the exact same weather as YYC and has a much better social scene. Uh ok? Are you self-prescribing? He’s a bit much. I do know that most specialists are a bit dicky but he was extra dicky. LOL Not looking forward to another sit down with him. Thankfully he’s not doing the surgery.

I took a wrong turn coming home and ended up touring Edmonton N lol. Found a Marshall’s, Homesense, Winners, Superstore, Costco and some other fun stores I shall return to. Tomorrow is just Physio. Dad took Cali for a great off leash run and then spoiled her with his “biscuits” that he brought. They have quite the dance routine when it comes to these biscuits!!

I am actually enjoying my little life here despite the weather and bad roads. I think its the simplicity of it that I love. There are no extra luxuries, there are just what I need and no more. And that is totally fine. A life of over consumption is quite exhausting.

On another completely different note, yesterday at the Y there was a Judo teen club being coached by a Judo guy, I guess. He told them to each do 2k on the rower so I got to enjoy some of the worst technique I have ever seen. Think of the Tasmanian Devil after drinking 5 red bulls and then jumping on the rower. I actually has to stop this kid from blowing up and show him what a proper stroke looked like, not to the liking of his coach. The next girl up took head of my advice and beat the other kids time. Fun times. They also have 2 assault bikes there, which I have yet to see anyone on. Well until tomorrow my peeps. 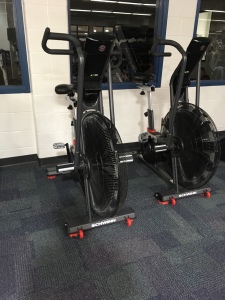 Find out more about me and CF